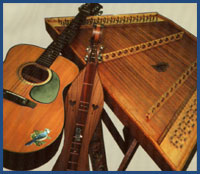 Mission Statement:  Uncle Carl's Dulcimer Club (UCDC) is a club for dulcimer players to get together and enjoy the music of the Sweet Tune Instrument.  The activities of the club are centered around the dulcimer to promote and encourage the joys of the music and playing of this instrument.  To further our goal, we invite anyone to come to our meetings and performing dates to enjoy our music and fellowship.

Club History:  Carl Hakes was a musician all his life and had his own band. He was an excellent fiddle player and he had been building hammered dulcimers since 1973.  It was members of his family and friends who on May 22, 1982, held the first meeting of "Uncle Carl’s Tri County Dulcimer Club".  For the first meeting there were 26 people: 11 hammered dulcimers, one guitar, one harmonica, a mountain dulcimer and an auto harp.  After an afternoon of music, it was decided to have a second meeting and a 2nd newsletter was sent out, along with music to the songs that were decided to be learned.  Golden Slippers was at the top of the list, followed by Oh, Susanna, Red River Valley, You are My Sunshine, Red Wing, Amazing Grace, and I Saw The Light.

On August 4, 1984, it was voted that the club sponsor a festival which came to be known as the Southern Michigan Dulcimer Festival.  It was to be held in historic Marshall, Michigan, at the Calhoun County Fair Grounds.  This festival lasted for 20 years and was also held in Hastings and Parma, Michigan.  It was also voted at this time to drop the Tri County from the club name since it had members from nine different counties.

On March 12,1988, the club made their first recording, and in 1989 the first installments of the History of the Hammered Dulcimer as compiled by Dean Borton were published.  On October 11, 1998, a second recording was completed. In 2002,  for the club’s 20th anniversary, a book was put together celebrating "20 Years of Making Music".

Today, the club has 100 tunes in its repertoire and continues to meet monthly. Along with playing for others, the club strives to keep the wonderful music of the hammered dulcimer alive and well.  For further information about the club, please contact one of the current officers (see Contact Us).